From the author of The Stories of Serendipity, and The Four Winds comes a brand new stand alone novel, The Fixer Upper, by Anne Conley. 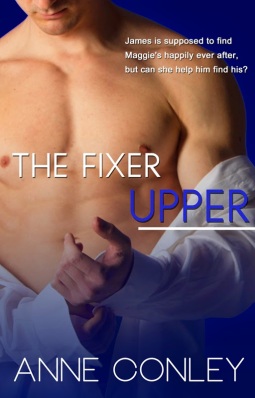 James, a UK based chef, has tried to make a career with EAT-TV, but his womanizing ways aren’t what they’re looking for with their wholesome family style image.  However, the producers of a new reality show about single life, The Fixer Upper, think he’s perfect.  His agent convinces him to give it a shot.  His overpriced bachelor pad is needing a mortgage payment, and he needs a job to support the tween-aged daughter that’s recently been dumped in his lap.
Margaret Dumas is control freak who has micromanaged her marriage to shambles.  When she makes a deal with her mother to quit fixing her up if she’ll do this new reality show, she thinks she’s won.  No more blind dates, no more friendly advice, no more “chance meetings” with her Mother’s friends’ sons.  The only catch is she’s got to go on detestable reality television and expose her dating habits to a total stranger who is supposed to “fix” her and make her a dating machine.  As if.

When Margaret meets James, they clash on the surface, but deep down they recognize something in the other that they want: redemption.

Excerpt from The Fixer Upper:

“So, tell me about yourself.”  James took a sip of the juice and managed to barely suppress his grimace.  Okay, so it’s not fresh squeezed, get over it.  Pushing her aloofness back in the forefront of her mind, she was better able to control her reactions to him and focus on the situation at hand.
“I’m thirty-eight, divorced, an accountant.  I live here with my dog, Puppet, he’s out in the backyard, or else he’d be in your lap, messing up your, uh… jeans.”  Looking at his jeans while she’d said that

screwed her up again, so she looked around the room.  “Not much to tell…”

“Okay, why did you sign up for the show?”
“Oh, that’s easy.  My mother did it.  I’m doing this to make her happy.  Not really interested in a relationship.  Divorce just finalized last month, and I don’t really see the point in a relationship at this moment.  But she’s brutal in her doggedness.”  She flashed him a smile and his faltered, much to her satisfaction.  “She’s signed me up for online dating, tried introducing me to sons of her friends, you name it.  I’m trying to get her off my back.”
He ran his finger over his bottom lip.  “So let me get this straight.  You have no desire to date, yet you’re on the show to find out how to date?  To be fixed up?”  He leaned back, his arms stretched over the sofa back.  “How utterly lazy of you.” 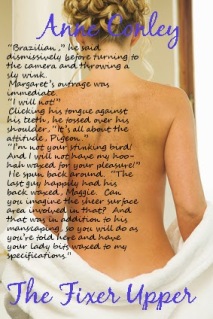 “What?  No, I’m not lazy.  Far from it—”  She started to explain herself, but he didn’t let her words come out.
“Sounds like it to me.”  He crossed an ankle over his knee in an infuriating gesture.  “You don’t want to date, yet you call us in to do all the work for you.”
Her nerves dissolved as indignation materialized.  She was suddenly angry at this man who came into her house with cameras to make her look like a complete loser.  “That’s not it.  I go out!”
James leaned forward, blue eyes sparkling with interest.  “Now we’re getting there.  Who do you go out with?”
“N-no one.  I go out to a bar by my office.  Alone.”  Margaret tried to steel her voice, but heard her resolve crumble in the hopelessness that her life had become.  She didn’t need this man to make her sound like a loser, she was one.
“Do you pick up men?”  he asked eagerly, and Margaret stiffened her backbone as he managed to make her habitual routine sound salacious.
“No!  How trashy!  I don’t do one-night stands.”  Loser.
“I didn’t say you did, pigeon, but do you speak to potential dates in this bar?”  His eyes roamed her legs, and Margaret crossed them self-consciously, to no avail.  The motion seemed to draw his attention further, and his tongue snaked out, resting on the corner of his lip.
“Um, not exactly.”  Would you please put that tongue away?  It’s highly distracting.  “I mean, I speak to them, to say I’m not interested.”
His gaze snapped back up to her eyes, and thankfully, his tongue went back to its typical place.  “So, you’re completely uninterested in dating?”
She shrugged.  “Not uninterested, per se, I just haven’t met anyone who meets my standards, yet.”
He steepled his fingers under his chin, as if deep in thought, and Margaret wondered if the affectation was for the camera.  “What, exactly, are your standards, Ms. Dumas?”
She leaned back and relaxed a little.  This was an easy question.  And it got the focus off her, at least.  “Well, he needs to be taller than me, fit physique, have ambition, be neat, attractive, work a good job, enjoy his mother, no children, be close to my age, and have a hobby.”  Margaret ticked each item off on her fingers like a shopping list.
“Well, that’s not too much to ask, is it?”  She couldn’t tell if he was being sarcastic or not, as she watched him make some notes on a notepad he retrieved from the case he’d brought in.  “How tall are you?”
“Five foot, nine inches.”
“How fit is fit?”  He stared at her, an unreadable expression on his face.
“Excuse me?” 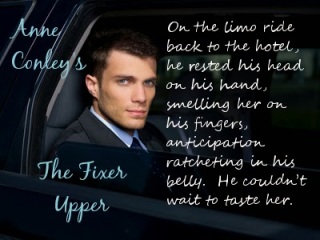 “Do you want a muscle bound god, or are you content with a small spare tire, befitting a man of a certain age?”  His accent distracted her mercilessly, and she had to concentrate on his words instead of his voice.
“I’m not into steroid-users.  They don’t have to be that fit, but spare tires?  Um, I don’t think so.”
“Vague.”  He stood, and to her mortification, reached behind his neck and pulled his t-shirt over his head to reveal the perfectly sculpted torso.  Lean muscle, not too bulky, the smallest trail of reddish-brown hair leading to the snap of his jeans alluding to something impressive down there.  “Do you consider this fit?”
Her eyes were glued to the v formation on his abdomen.  Why did that part of a man’s physique always make her mouth completely fill with saliva?  Her eyes trailed back up over his defined chest—dips and valleys punctuated by a smattering of hair—to admire his wide shoulders.  She noticed his Adam’s apple on her way up to his kissable lips, smirking at her.  Was that a gleam in his eyes?
Shit.  He’d asked her a question, and she had no idea what it was.  Hoping an absent nod would be sufficient, she provided one of those before dragging her eyes away.
“Please put your shirt back on, that’s really not appropriate, um… I don’t think.”
She managed to release the breath she hadn’t realized she’d been holding when he put his shirt back on, covering the smooth tanned skin and muscles.  Plopping back on the sofa, he resumed his note-taking.
“Now I know what fit means, thank you.  I think the word ambition speaks for itself, but attractive has all sorts of connotations.  Can you elaborate on what you find attractive?”

His eyes were back on her, his gaze seeking answers, flicking back and forth between her eyes.
“Um, I like dark hair, but blond hair, as long as it’s neat is okay, too.  I’ve always been attracted to light eyes and smooth skin, but a certain ruggedness is okay as well.”  She bit her lip in thought, refusing to meet his eyes, instead focusing on the quiches perfectly arranged on the platter in front of her.  “I suppose a straight nose is in there somewhere, as well as nice lips… ” Her voice trailed off as her eyes rose, with a will of their own, to see him staring at her, that damned smirk on his mouth again.  Nice lips.  Plump, but not too much.  Definitely kissable.  She cleared her throat.
“He needs to have good manners, too.  No chewing with his mouth open, holds doors for ladies, things like that,” she added for good measure, noting to herself how squeaky her voice sounded.
He put his pen behind his ear and slipped his notepad into his case.  “So, let me make sure I’m clear.  You’re looking for a financially stable man in his late thirties, early forties, with hobbies, smooth skin, rugged appeal, dark hair, who works out regularly, has no children, good relationship with his mum, who holds doors for others, doesn’t smack when he chews, and aspirations for even more?”  He clapped his hands on his thighs as if he was about to stand.  “You, my dear, have impossibly high standards.”
One of her eyebrows arched in incredulity.  “Excuse me?”
“If there’s a man out there like that, I’m sure every woman on the planet would like an introduction, but we’ll do our best.  In the meanwhile, you need some work yourself.  If you’re going to hold others to such a high standard, you’ll need to go through some changes.”  He stood, towering over her, his eyes roaming her body, expression unreadable.
Grab your copy on Amazon ,  Scribd, Page Foundry, and Kobo.

Barnes and Noble and iTunes will have it soon.