💀 How To Be A Necromancer 💀

When your family has one world-changing, dark secret to hide—you assume it’s the only one.

The latest in a long line of powerful necromancers, Vexa is just trying to live a normal life without starting a zombie apocalypse. But after twenty-seven years of suppressing her powers, Vexa’s secret catches up to her in the form of a strange candle, a relic of the days when her ancestors had complete power over life and death, and in a gorgeous man with a terrible curse.

But a sinister ancestor and a captivating enemy have other plans for her. She may finally have found a place where she can truly be herself . . . if the dark forces pursuing the candle don’t destroy her first.

The How to Be A Necromancer series is an Action-Packed, Sexy Urban Fantasy Series, from USA Today bestselling authors, D.D.Miers & Graceley Knox.

The entire Kindred Souls series is now available in a boxset. Plus a new story included at the end.

Rhapsody has spent her life on the move as a traveling bard who sings out against the king’s law stating it’s illegal to love anyone but your kindred souls.

But everything in her life changes when assassins, royalty, and dragons charge into her life, turning everything upside down, leading her into intrigue and danger, adventure and romance.

A short story exclusive to this edition

Kindred Souls is a reverse harem/poly fantasy romance where the leading lady doesn’t have to choose between love interests. There is MM content and the series is rated mature and recommended for readers 18+ 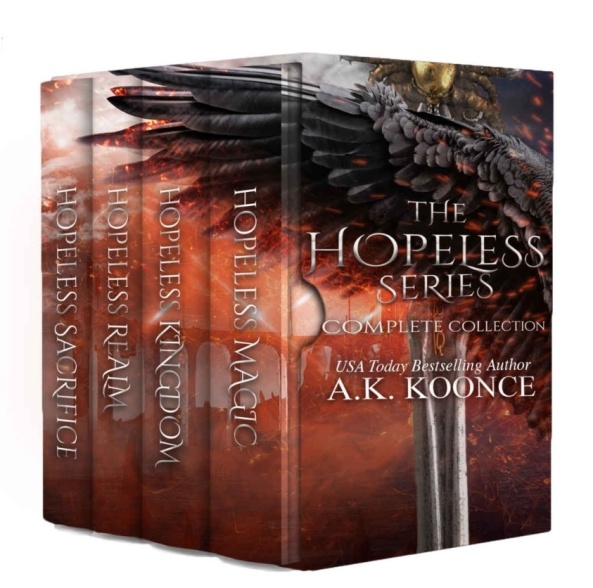 If life really was a fairy tale, Zakara would never be the damsel in distress. She’d be a thief, and Prince Charming wouldn’t have a clue how to steal the heart of the conniving criminal.

Zakara saves not one, but three men locked inside the tallest tower. Her first instinct is to ditch them as soon as possible, but they have one thing that intrigues her more than wealth:

Fae magic once ruled the world, until it disappeared without a trace. Only myths of the magic wielders linger in their destroyed society.

The three prisoners claim to be fae, but she doesn’t trust them.

She doesn’t trust anyone.

Can Prince Ryder convince the pretty thief to lead them to the Hopeless City? Or will she kill him before they even arrive?

This is a complete reverse harem box set including Hopeless Magic, Hopeless Kingdom, Hopeless Realm, and Hopeless Sacrifice. Recommended for readers 18 and over.

That was the plan.

I wasn’t looking for guys.

Okay that’s a lie, it’s been a long six months, but I didn’t expect Silas, Rhett, and Amos to turn up.

I didn’t believe in genies, either, until the three of them started disappearing and reappearing at will.

The truth is I wouldn’t be here without them. But sometimes you don’t always appreciate what you have while it’s right in front of you with all that bronze skin and hard abs. There’s something uniquely hot about a guy dressed as a Middle Eastern assassin defending you against an Egyptian God. I have three.

Silas has sworn to protect me. Amos, too.

Rhett… well he can please his miserable self. But they all think I’m someone important. Someone impossible.

They want to stay close.

I can see a number of benefits to having them around but do I really want three genies following my every move?

This why choose novel contains strong language and adult themes.

I’m surrounded by dragons, and they’re all afraid of me.

At the age of nine, I mistakenly touched someone else, giving him excruciating pain. Through that awful experience, I found out that a graze of my fingertips could torment any being with dragon blood. Because I was surrounded by them in my kingdom, my ability labelled me as cursed. And with that, my family lost everything.

I promised myself to never be shunned away again. That I had to be someone important for people to look up to. A crucial vote was coming up and I would do anything to win it. Then I met them. Four hidrae princes, dragon-shifters of the most powerful kind, who were immune to my abilities. Being able to touch someone else was intoxicating. Associating with them was killing my chances of winning the vote, but the princes drew me in—Rylan with his regal demeanor, Micah with his mystery, Kael who threw all care to the winds… and Gaius? Gaius should just fall on his face and die.

Don’t miss this slow-burn reverse harem romance, set in a world of fantasy, dragons and intrigue! 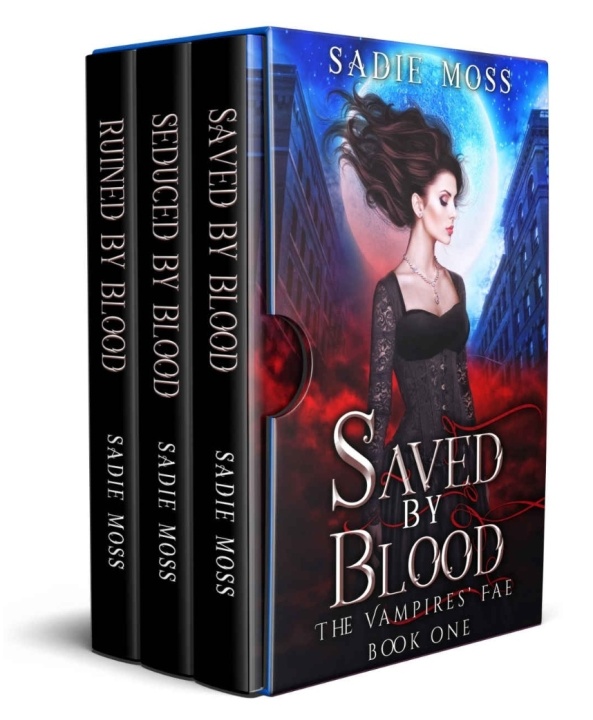 Book One: Saved by Blood

They found me nearly dead. To save me, they had to turn me…

When I moved to New York after a bad divorce, I planned to re-invent myself… I just had no idea the ‘new me’ would be a vampire.

Or that the three (yes, three!) vampires who turned me would be the hottest, most frustrating men I’d ever met.

Now creepy shadow monsters are stalking me, and I don’t know why. But teaming up with these dangerously sexy brothers may be my best chance for survival, even though being around them does weird things to my heart.

The old me was too scared to even start dating again.

She wants to devour all three of them.

This box set is the complete collection of the bestselling series, The Vampires’ Fae.

The Vampires’ Fae series is a medium-burn reverse harem story intended for ages 18+. This boxed set contains strong language, sexual situations, and a heroine who doesn’t have to choose between her men.

With four words Helena’s quiet life goes up in flames. When her childhood friend returns to tell her that she is the prophesied ruler of the Chosen, those blessed with the gift of magic, there’s no avoiding her destiny.

Suddenly, Helena is surrounded by a circle of protectors, each man having sworn their loyalty to her since her birth. All except for one: her Mate.

It’s not enough that she learn how to use her magic and undergo a trial to prove her worthiness; in order to claim her title, Helena must also find the man who carries the other half of her soul.

Exiled due to a past he had no part in, Von is the last man the Chosen expect Helena to select. Despite their protests, his soul calls to hers and there’s no denying that he was made for her. But the prophecy stands and all isn’t as it seems.

There’s an enemy lurking within plain sight who will stop at nothing to destroy her.