One day, I’m nobody. The next, I’m a witch. And I’ve caught the attention of three smoking hot demons.

This sinfully steamy reverse harem series is now bundled with exclusive bonus content! Get all five books (over 600 pages) for an incredibly low price.

Follow Deja as she steps into her power, recalls her past lives, and fights the persecution of the ones she loves.

Books included in this boxed set: 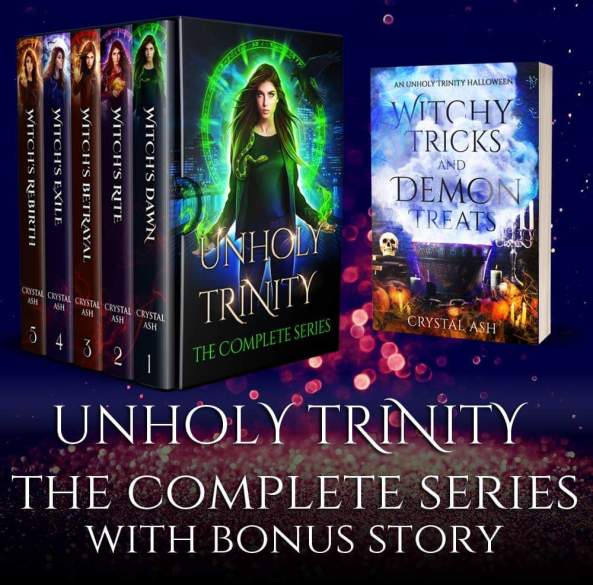 Five steps to getting over a nasty break-up:

1. Inherit a mini-castle from your reclusive grand-aunt.

2. Fall through a mirror into a decadent upside-down world.

3. Get to know the smoking-hot locals. Prickly Hatter. Playful Chess. And the passionate White Knight… Wait, what was I talking about? Oh, right.

4. Discover you possess powers that could win a rebellion against a tyrannical queen.

5. Keep a tight hold on your head—and your heart.

When I tumbled into Wonderland, I only wanted to escape the epic mess my life had become. I’m not sure I can trust anything in this bizarre, intoxicating place. But the three incredibly enticing men I’ve met here might need me even more than anyone back home ever has.

Maybe a little heroism is all it’ll take to heal my wounds and theirs. As long as the Queen of Hearts doesn’t come for our heads first…

*Wicked Wonderland is the first book in a medium-burn reverse harem series that reimagines Alice in Wonderland. If you love spirited heroines, hot men with secrets to spare, and worlds full of unexpected delights and horrors, step through the looking-glass today!*

The gods walk among us. And they just might steal your soul… or your heart.

I thought I’d survived everything life could throw at me. All I wanted was to keep my distance from the criminals I work for and get my little brother out of the hell that is our mother’s house.

Then I died and woke up to four stunningly hot gods telling me I’m now a valkyrie.

Sly, sharp Loki. Jovial but ferocious Thor. Dreamily compassionate Baldur. Grim and secretive Hod. They all have something to teach me. And around them, my walls start to crack.

But the gods didn’t summon me just for kicks. Their king is missing, and they need me to find him. The first three valkyries they sent on the job never made it back.

More power is awakening in me than I could ever have imagined—and the gods’ enemies are more devious than even they knew. It’s going to take every trick in the book for me to save myself, my brother, and these divine men who’re getting under my skin in the most alluring way.

I’m Aria Watson, and Valhalla ain’t seen nothing yet.

*Claimed by Gods is the first full-length novel in a medium-burn reverse harem urban fantasy series. This action-packed, heart-wrenching ride gives you a kickass heroine, four irresistible gods, and Norse mythology like you’ve never seen it before.*

⚜ Keepers of the Talisman ⚜

As a paranormal investigator, Rayne is no stranger to the unknown. But when she embarks on her latest case, her life takes a turn toward the magical. An ancient talisman and four sexy as hell magical keepers all but land in her lap, changing not only who she is, but what she will become. Rayne soon learns her newly acquired type of magic is sought out and destroyed. It might just seal her fate.

Caught in between her old life and learning to be a witch, Rayne will be forced to decide between ending a curse or walking away and risking the lives of herself and others. Toussaint, Leif, Aedan, and Maceo are just as unprepared to become Rayne’s Keepers as she is to embrace her magical powers. Knowing she is the key to breaking the curse, can Rayne master her magic and fix what was broken?

If you like paranormal sightings, shifters, witches, and tempting men, this reverse harem will have you turning the pages!

A match made in heaven … or in the bathroom, rather.

My name is Arizona Smoke, and I’m the proud owner of a house haunted by my dead Gram, best friend to a cocktail dress loving werewolf, and apparent soul mate to four plumbers who also happen to be elemental dragons. Besides rippling pectorals, tattoos, and … uh, nice, long pipes, the guys also have control of the elements.

Supernatural law (whoever heard of such a thing anyway?) dictates that since I stumbled upon the guys in their alternate forms, I have to marry them. All four of them. Oh, and apparently one lousy (okay, awesome) night of sex means that I’m an elemental, too—and no amount of magical penicillin can cure this disease.

All I wanted was hot running water and toilets that flushed, but now I’m dealing with monsters lurking in the sewers, supernatural politics, and four penniless (but totally hot) plumbers living in my crumbling old Victorian.

I’m Ari Smoke, wine aficionado, ex-barista, and a girl who is completely out of her element.

Having four hot husbands is nice … but the death threats, not so much.

ELEMENTS OF MISCHIEF is a full-length comedic paranormal, reverse harem romance. This means our leading lady has four male love interests (or more!) and doesn’t have to choose between them. This book is full of steamy sex, ridiculous plumbing puns, and heaps of action, intrigue, and … well, more puns. 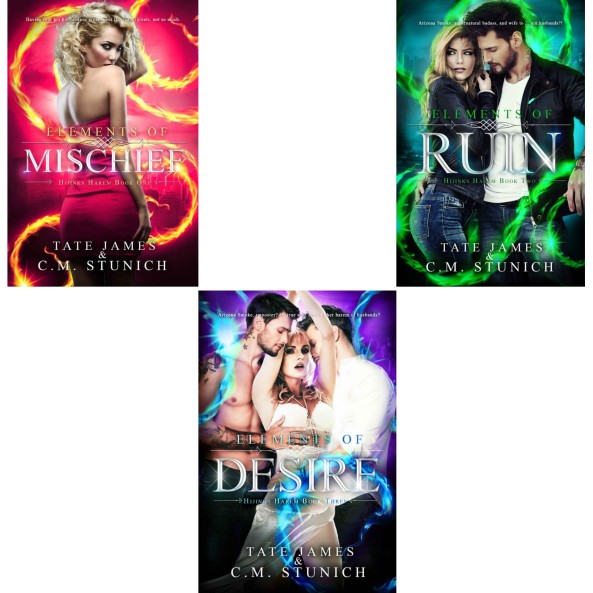 I want vengeance so badly that I can almost taste it. It’s all I’ve ever wanted. So, I did what anyone in my unique position would do. I slapped on a secret identity and became an internationally renowned thief, known as The Fox. Nobody knows me. Nobody can catch me.

Or so I thought…

It turns out; I have what they want. Special abilities. And trust me, these abilities are coveted–and dangerous. Now, I don’t know who to trust or where to go. Peril lurks on every corner as I try to uncover my past and origin. Teaming up with unlikely allies may be my only chance at survival or my biggest mistake. Only time will tell.

I’m Kit Davenport and this is only the beginning.

** Warning: This book is a Reverse Harem. It also contains violence, sex, bad-language and content which some readers may find triggering. **