Book Blurb:  100,000 children are sexually trafficked every year in the US.  In the 1990s, Charlie was one of those children.  She’s spent her adult life getting past that, trying to become a successful business owner in Serendipity, TX.   Relationships are not goals for her.  In fact, she’s not even sure she has what it takes to be a part of one.

Les is a fool for love.  All he’s ever wanted was a girl.  Now that every last one of his friends are married, and in happy relationships with families, he can’t stop thinking about the sexy lady who sells house parts, even if everything about her screams at him to stay away.  He just can’t.
When they are thrown together on a cross-country road trip, Charlie’s past comes back to her full-force, long-buried memories inundating her.  Les seems to be the only thing grounding her to the present, when everything else seems to be trying to tear her apart.
While it has a HEA, the road getting there is long, rough, and dark.  Enjoy the ride.

He was a fool for love–had been in love with nearly every woman he’d ever met–and had never really had a serious relationship.  He’d had a couple of seriously one-sided ones, but nothing ever stuck.  Sweetness wouldn’t be any different.
But she just might come and work for him, if he could get the price right.
He dialed her number and listened to it ring.
“Charlie’s Recycled Restoration, can I help you?”  Her sweet, throaty voice screamed sex at him, and he shifted in his seat to accompany the sudden tightness in his pants.
“Hey there, Sweetness.”
“Hey, Les.  Did your clients like any of the molding?”
“Yeah, I’ll be out later today to pick it up, but I was calling about something else.”
“Oh yeah?”  Her voice lowered an octave, and Les had to control the urge to start talking dirty. That wasn’t really his bag, but something about this woman made him think all sorts of inappropriate thoughts.
“How would you like to come over to the dark side…?”
“Excuse me?” 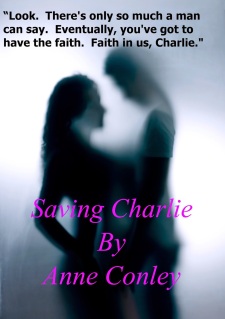 “How much is Charlie paying you?  I’ll double it if you come work for me.  I need someone with your knowledge and aptitude to help me.  And you’re good with organization and numbers.  Come on, please?”
“I don’t think so, Les.  I’ve got a really good gig here.”  He could hear her laughing, and it stung a little, but he was nothing if not persistent.
“What, are there benefits I’m not aware of?”
“You could say so, yes.”  She sounded cagey, but still playful, so he decided to play along.
“I can tack on some extra benefits, Sweetness.  You just name it.”  Her breath caught on that line, so he continued.  At some point, he probably shouldn’t have, but he couldn’t stop himself.  The husky timbre of his voice gave his intentions away.  “I got all sorts of benefits in mind for you, Sweetness.”
“I’m sure your benefits are…amazing.”  She was breathless, and Les did a fist pump in the air in spite of himself.  “But I really can’t.”
He wilted a little, but remained confident persistence would pay off in the long run.  “Think about it, the offer’s open.”  Defeated, he ended the call with the promise of seeing her that afternoon.  He’d try to time it so her boyfriend wasn’t there.  Maybe he could illustrate the benefits he had in mind.